Chat magazine has come up trumps yet again. There is an 'asparamancer' telling us about how she predicts the future by throwing asparagus in the air then 'reading it when it lands.' She talks about how she's quite famous because she's the only asparagus reader in the world.

Things she has predicted have all come true, she says. This edition, from late June has a prediction about Euro 2012. She's pretty good at this asparagus thing because she accurately predicts that Germany or Holland will win.... O... Wait a minute....

The euro will also finally collapse but it won't affect the British economy too badly. That's a relief, because she so good at predicting things, evidenced in her Euro 2012 winner prediction, that I totally trust her on this one too.

A few things are wrong with this prediction. 'Cut back if you're drinking too much' isn't a prediction! It's good medical advice. Most people drink alcohol. A lot of people who drink alcohol do so regularly. This, we are told, is bad for us, we should not drink regularly. Also, if you drink at home, it's seen as a bit alcoholic-ish. If you have a few big nights out at the weekend, it's a bit binge drinker-y. It's likely that most people who drink have, at one time of other, thought that maybe they were drinking too much. So talking about overindulgence in alcohol, it's a safe bet that a lot of people will fall under that barrier.

About planning a holiday with a friend. That's not a prediction either, is it? It's July. Most people with kids will have something planned for summer, that's when most people are going on holiday. For the childless among us, they're probably waiting for September or October to holiday, when the flights are cheaper, or maybe a bit later, to get some winter sun. Predicting that someone has a trip planned is not a special skill. It's just a good bet. 90% of people in the UK will have a holiday planned.

So aside from all that stuff, how exciting is it that the lady reads asparagus and is really good at it? Honest. 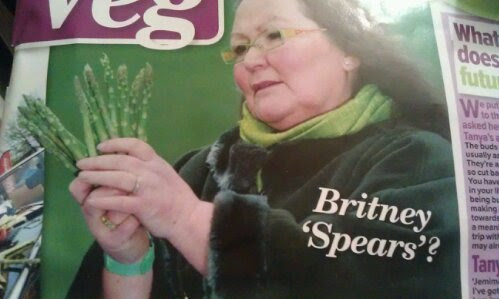